Over the last half year or so, I have been interested in visiting the stairways of the Berkeley Hills below Lake Anza, and the stairways in central and northeast areas of San Francisco. This past weekend, June 3rd through 7th, 2016, I had my chance to take a mini-vacation and walk three of four challenging routes I had planned, one in the Berkeley Hills, and then two in central San Francisco, on three consecutive days.  I set out to enjoy the high density (proximity) of stairs, much higher than in Silver Lake, obtain step counts (something the locals have apparently not done and not placed online), and have great workouts. What follows is a description of my explorations, this time, the Mosaic Loop.

The full set of walk photos of the features on the above map, can be found on Facebook, in this publicly accessible Mosaic Loop photo album. And here is the link to the Mosaic Loop Google Map of Central San Francisco, seen in the photo above.

As you can see from the map above, The mosaic loop has a high stairway density, of approximately 6 stairways per mile, over the 7 mile route. The weather was cold, damp, cloudy and windy, when I started at 8am. I was already more than a bit sore from the long stair-walk I completed in Berkeley the day before, which is why I chose to do this relatively short, for me at any rate, 7 mile walk. I spent the first few miles of the walk, walking in a low level cloud, which condensed on the pine trees, causing the branches to rain on me as I walked under them, so I wore my windbreaker for the lion’s share of the trip. The walk started at the foot of the Hidden Garden Steps, the continuation of 16th Street south, as a stairway up hill from Kirkland St. As an aside, San Francisco does a nice job of embedding street names into the sidewalk concrete, as this photo near the start, shows: 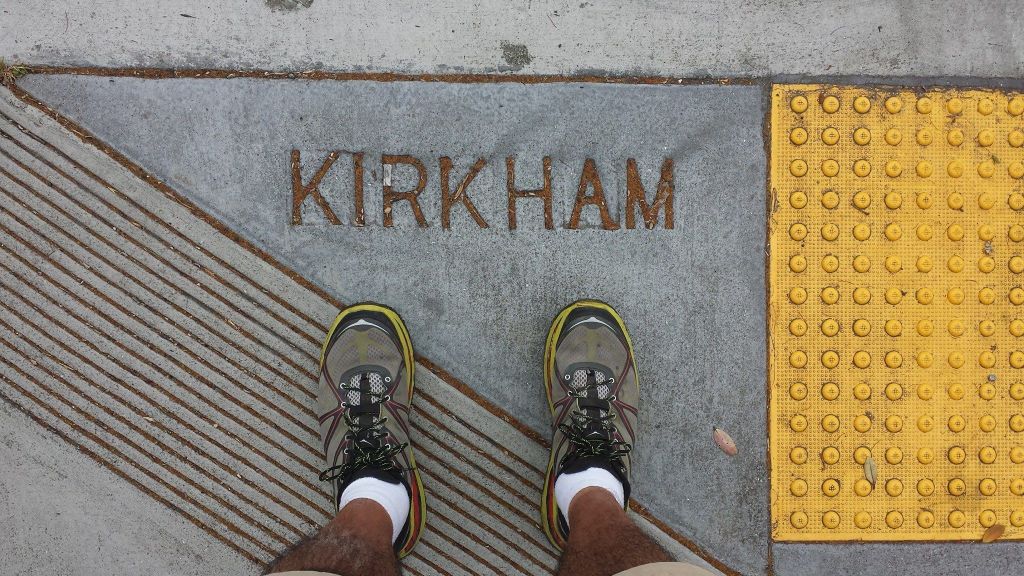 The route begins with a gorgeous view straight up the Hidden Garden Steps, the newer and slightly smaller of the two large mosaic stairways in this area. The stairway has a kink in the middle so one cannot see all of it at the same time, so I took shots of the lower and upper flights and put them together so you can see the entirety of this wonderful art:

There is a lot to view on this stairway, so take your time and ogle the artwork. If you start early in the morning you will have this stairway to yourself, later in the day it becomes very touristy and crowded, as you can see in some of my photos in the facebook album linked at the top of this blog. This comment also applies to the next stairway, the Stairway to Heaven Mosaic, just up the street on Moraga at 16th, the second stairway of the tour. Because this is such a long stairway, with 163 steps, I made another composite showing the entire stairway and the upper flights:

Again, this stairway is better for viewing in the early morning, and like the Hidden Garden Steps, there is a much to see at both the large and small scales. Take your time and drink it all in with your eyes, you’ll be glad for the rest, as there is much stair-climbing ahead! As another aside, the much smaller, but also much wider mosaic ‘Ocean Steps’, at the Redondo Beach Pier, was inspired by this mosaic. Here is a photo for comparison:

From the top of the stairway to heaven, we head east on 15th and climb up and over a retaining wall on a stairway, then continuing eastward, reach the first of a pair of stairways that climb to and then descend from the top of aptly named Grand View Park, which has a 360 degree view of the City. Here is a panorama I shot from the top of the western Grand View Park stairway, facing westward, showing the western San Francisco flat-lands and clouds over the Pacific ocean:

From Grand View Park the route zig-zags up and down a series of 8 stairways on the ridge connecting to Golden Gate Heights Park at about 1.4 miles into the walk. Here is a photo of the two largest climbs, Mount Lane and West Aerial Way, on this segment. Do note that I was ascending into clouds, and the tree branches along these climbs were condensing the cloud-water into a light rain that fell on me as I climbed these stairways. You can see the darker, wet steps higher up on Aerial Way from the “tree rain”: I wasn’t walking as fast as I usually do, both from taking a lot of photos, and because I was definitely feeling the walk I had done yesterday in the Berkeley Hills! When I reached Golden Gate Park, where Funston and 12th Streets converge into Rockridge Dr, I noticed a stairway leading into the park. It turns out there are two stairways, that conveniently connect to the a walkway that loops back to Rockridge Dr, so I added them to the route. The park also has water. Here is the first of the two stairways: 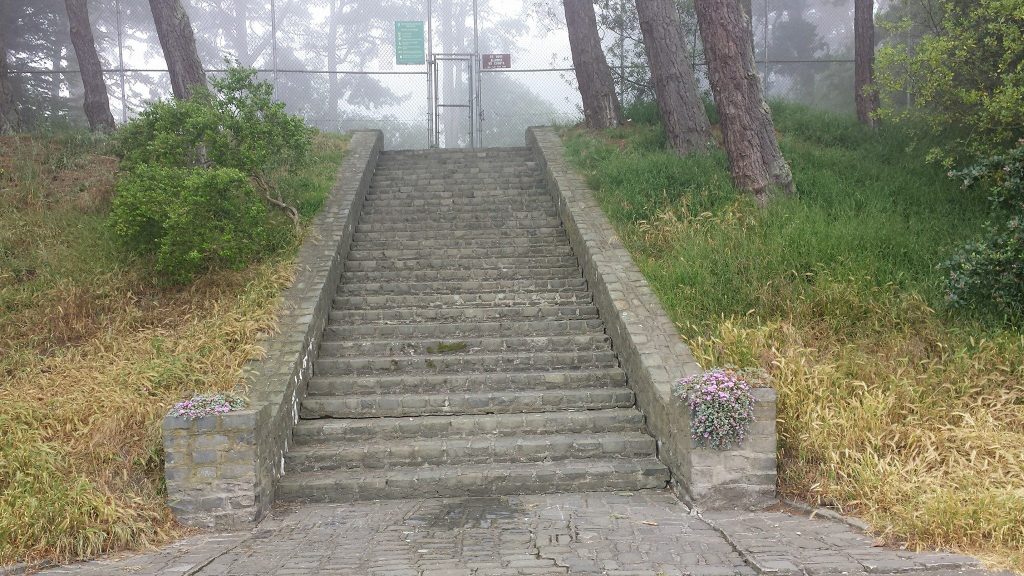 From the park the route descends via a couple of stairways to the corner of Quintara and 15th Ave., The stairway on Quintara is impressive, with a split at the bottom, climbing 136 steps up to the top of the hill at 14th Ave. Here is a photo of the stairway:

At the landing where the two lower stairways meet, I was greeted by a friendly orange tabby who just wanted some love!

After my cat petting episode, I continued on to the top of Quintara and then down the other side, passing the 2 mile mark, connecting to a walkway, and reaching a segment of residential streets with a number of small to medium sized stairways that increase pedestrian connectivity in the neighborhood. Here is a photo of the largest member of this set of stairways, the continuation of Alton Ave as 90 stair-steps:

After this neighborhood trek, the route takes you down to the Forest Hill Rail station, where street cars of yesteryear emerged out of a tunnel and traveled down Laguna Honda Blvd. This is similar to how Los Angeles Red Cars exited the Belmont Tunnel onto Glendale Blvd.  Across the street from the station is an entrance facade to the now defunct Laguna Honda Hospital, with gorgeous historical mural artwork. Here are some photos of the Twin Peaks Tunnel commemorative murals, and the stairway leading up to the Hospital:

The route crosses the street and heads through the arch and up the two stairways to the Hospital building. The stairway leads to a statue of Florence Nightingale, commemorated as the founder of professional nursing:

Turning around to look at the hospital, here is a panorama shot of the main entrance:

The building really is a beautiful example of Spanish Revival architecture, and spreads out over a large campus directly behind the main building in a series of parallel large buildings of similar design. Here is a shot from just past the far right corner of the above photo, looking leftward one of the parallel building ends, complete with circular towers:

From here that walk calms down and becomes a residential stroll through tract homes, traversing one walk-street between houses, and proceeds down Portola Street past a long row of multi-story houses, passing the 4 mile mark, before climbing a stairway leading up to the one pedestrian over-crossing of the route, seen here after crossing over to the north side of Portola, where the stairway is across, and to the right, partially obscured by a tree:

After descending a pedestrian ramp-street, and some more residential walking, we come to the picturesque bookend stairways on Pacheco Street. Here is a shot looking across to the longer northern Path St stairway from the southern stairs of Pacheco, the 5 mile mark is about half way between the two large planters in the scene ahead: 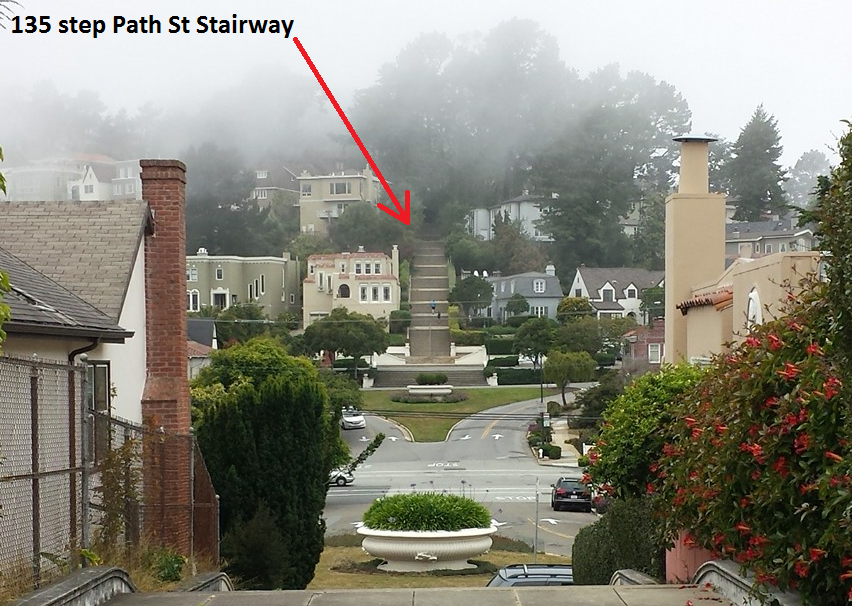 After climbing the Path St stairs, we venture back into hilly neighborhoods with a mixture of smaller and larger multi-set stairways, as the route winds back toward Grand View Park. Here are two of the large single set stairways on this traverse, Oriole and East Aerial: Note the inlaid street and path name in the concrete on the left image above, and that the 6 mile mark of the route is at the top of the Oriole stairway.

Continuing onward toward Grand View Park, the route descends two large stairways, before heading west toward the park on Moraga St, on the east side. The view from here is nice in that you can see the East Moraga stairway, and the continuation up into the park that was descended early in the walk:

The inscription on the large retaining wall reads: MORAGA ST, GOLDEN GATE HEIGHTS.
From the top of the first two stairways in this set, we head to the right northward, avoiding the upper stairway we descended earlier in the day, heading back toward the start, passing the 7 mile mark before the first (short, 20 down-steps) of the final two stairways. The final stairway is on 15th street, and has a whopping 193 steps, with fantastic views of the norther parts of central San Francisco, and here are a few photos of that descent: The lower composite photo is the view from about 100 steps down from the top of the 15th St stairway. That’s St Annes Roman Catholic Church to the right, with the twin towers and large circular stained glass window, which looked fantastic, architecturally speaking, in the bright afternoon sun! This view was a nice concluding visual treat to go with many others on this route. I like this walk so much, I would fly up to SF, walk it and then fly back to LA as a day trip; think of this as the Air to Stair event. The few photos I sampled for this blog do not come close to capturing the full beauty and great views on this walk, please check out the photo album at the link at the top just below the Google route map photo!