Streamline Moderne is an architecture style or movement that emerged in the mid-1930s, as a more horizontal, speed-and-flow focused variation of the more prevalent vertical and angular Art Deco architecture movement that started a decade earlier. Streamline Moderne was influenced by aerodynamic/hydrodynamic shapes, emphasizing curves to maximize speed and movement; thus we call our Streamline Moderne architecture tours, Go with the Flow. We also have a companion Facebook Group: Go with the Flow – Streamline Moderne Architecture in LA County
Streamline Moderne architectural designs are characterized by rounded corners, asymmetric shapes, stripes and bandings indicative of streamlining, along with the use of design elements like glass blocks, porthole (ship) style windows, flat roofs (often used as decks with ship-like deck railings). The French refer to streamline moderne as le style paquebot (ocean liner style) because of this strong connection between Streamline Moderne and nautical architectural elements, starting with the SS Normandie (1932). The streamline period we use for our purposes is from 1934 to 1954, and anything from 1960 onward is considered Streamline Revival or Neo-Streamline (the term we prefer). The photo above, of the Coca-Cola bottling plant in Los Angeles, designed by noted architect Robert V. Derrah in 1939, is iconic in this regard. The outer facade is composed of sheet metal, with rivets, bandings, and corner curves, looking exactly like a giant ship docked at 14th St and Central Avenue in Los Angeles. The ship-like design also includes round, porthole windows, a bridge or control tower, and deck railings. Streamline Moderne, or streamline for short, is not just for large industrial buildings, as there are plenty of residential examples, usually apartments or bungalow courts, and also a smaller number of single family home examples of this architectural style. For examples, here is an apartment complex on 142 and 144 Claremont Avenue in Long Beach showing classic streamline features:

Note the corner curves with glass blocks, curved stairways, curved awnings high on the buildings (sometimes called eyebrows), and the light colors, often white, or pastels that are characteristic of streamline designs. Below is a second apartment complex, designed by acclaimed architect and streamline designer, Milton J Black: 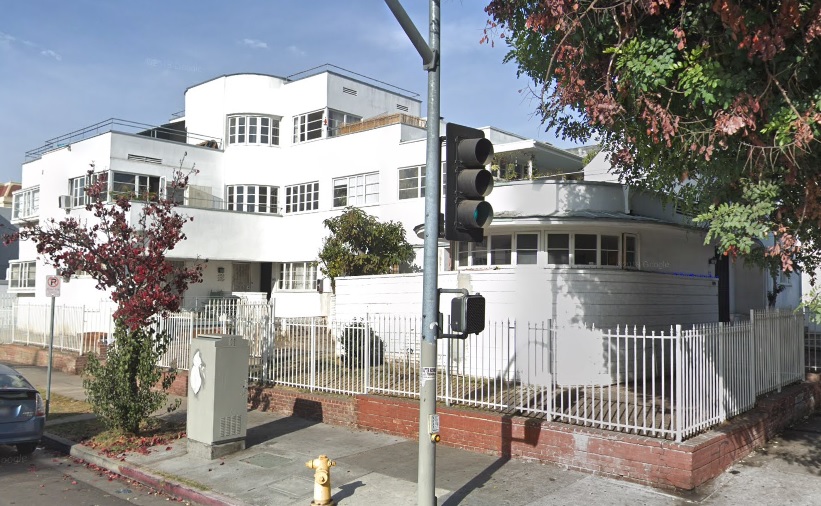 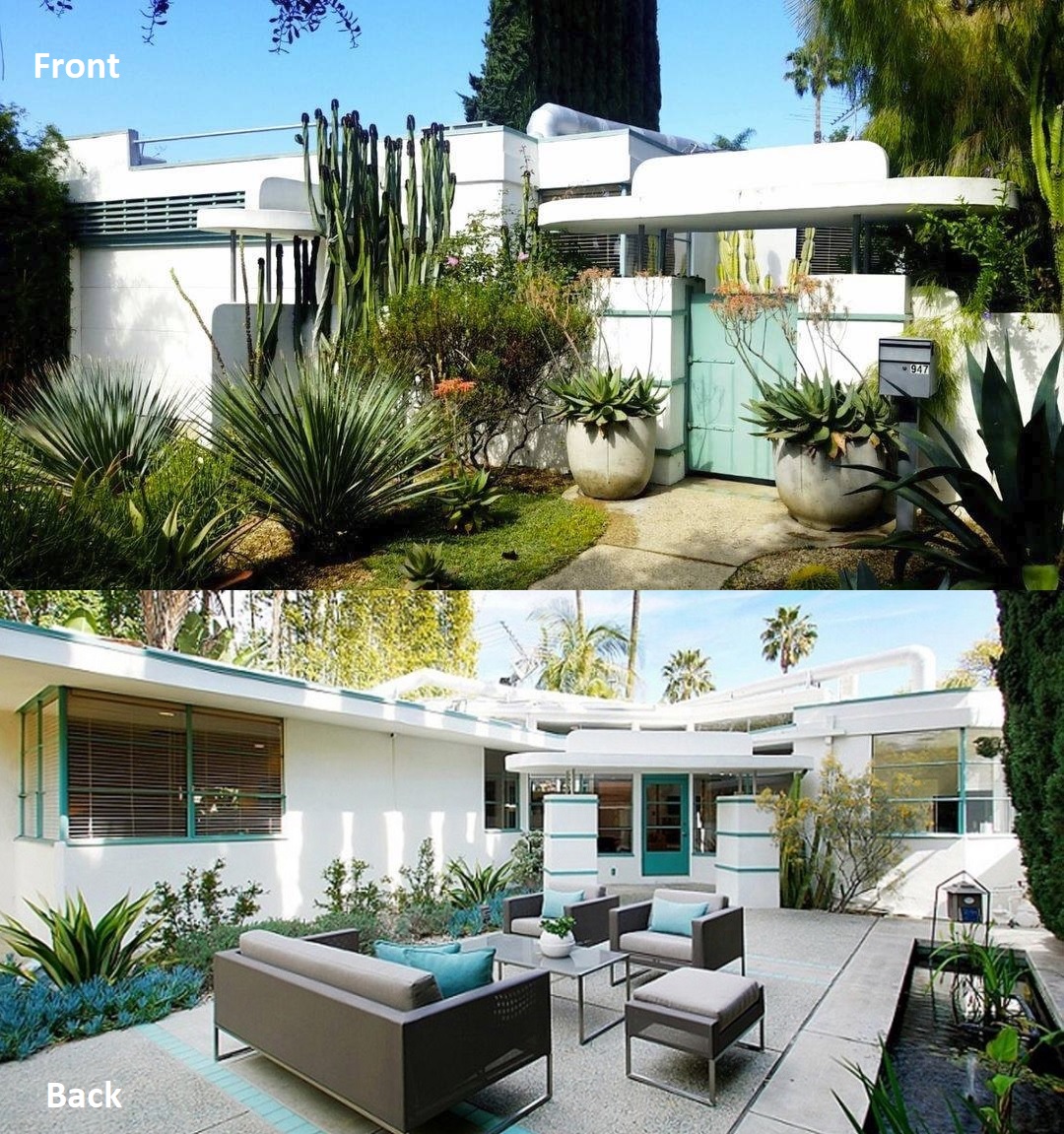 Note the single story, more horizontal design with abstract curved winged shape hovering over the entry gate and rear doors, the white with pastel accent colors, and liberal use of curved shapes in the design. Here is one last streamline residence, built for Victor M Carter, also designed by Milton J Black, at 4242 Newdale Drive, in Los Feliz,: 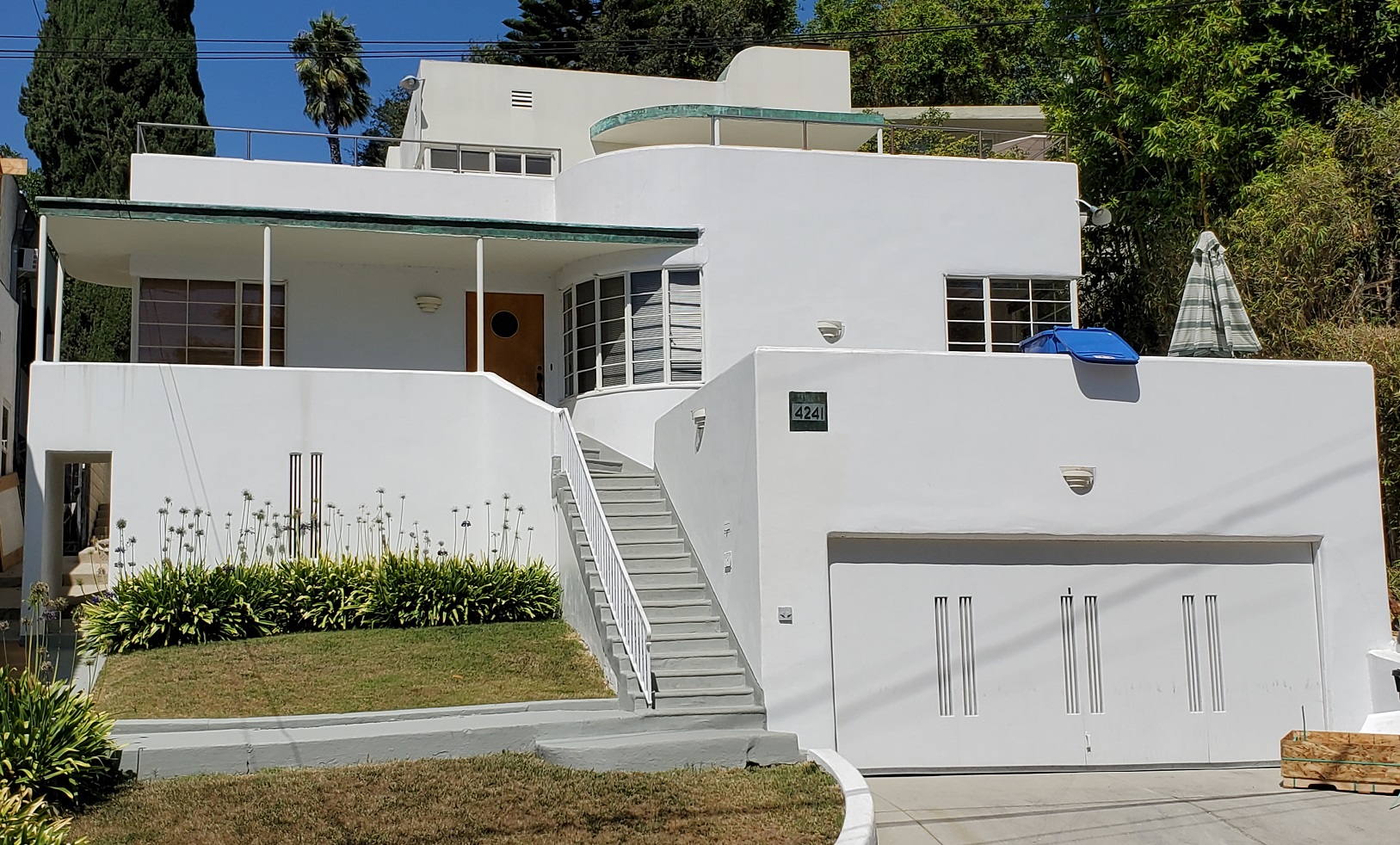 In contrast to the aircraft inspired Beery residence, this Carter residence – and William Kesling’s similar Skinner Residence – design is boat inspired, with corner curves, deck railings and even an entry stairway much like the types found on larger ships. It is also unusual, compared to most streamline designs, in that it has a front-facing garage that is integrated into the design, rather than being off to the side or in the back of the residence.
Streamline architecture was embraced by Los Angeles area architects and industrial/product designers, who had strong connections to resident aircraft and ship building industries during in the 1930s and 40s. These industrial/product designers in particular, used streamline designs in everything from paper clips to baby strollers, household appliances, and of course cars. Streamline design, like Art Deco before it, also had its effect on the movie industry. Do you remember The Emerald City from the 1939 film, The Wizard of Oz, that was at the end of the 4 main characters’ long and eventful journey on the Yellow Brick Road?

Emerald City is totally streamline! And this is no accident, as it was designed in 1938 by noted Art Deco/Streamline Moderne set designer Cedric Gibbons and Jack Martin Smith at MGM who created the set designs for this iconic movie. They were aiming for a dream-like design that looks like ‘test tubes upside down’, as Gibbons put it, but clearly with streamline  details! Streamline architectural design persisted in Los Angeles throughout the 1940s, giving way in the 1950s to The International Style and Mid-Century Modern styles of architecture that were prominent in the later 1940s through the 1960s.
Here is a Google map that shows every Streamline Moderne (and Art Deco) design we know of with map markers identifying each building or set of buildings throughout Los Angeles county:

What follows are a series of links containing helpful information about Streamline Moderne architecture that are also provided as quick links at the top of this page:
History/Information links
Terminology/Diagrams
Streamline Photo Gallery
Go with the Flow tour routes